If you ask anyone about their prom, they probably remember it vividly — it’s one of the most pivotal moments in our young lives. There’s so much pressure to go with the right person, to look amazing and, simply, to have the best night ever.

For Jesse Alloy, a 19-year-old sophomore at University of Virginia, prom was also life-changing. He attributes prom as his aha moment, when he decided it was time to tackle his weight.

Though prom stands out, it was a combination of things that prompted him to attempt to lose weight. “Senior year prom was coming up, and I wanted to ask someone,” he says. “But more specifically, I had seen some unflattering photos of myself. I realized it wasn’t exactly the photos that were unflattering. It was me. It was a classic wake-up call. Reality smacked me in the face, and I decided enough was enough.”

LET’S REWIND A LITTLE AND GET TO KNOW JESSE

Jesse was overweight from elementary school. His mom is in shape and works in the fitness industry but his dad is overweight. He thought it was simply in his genetics to be bigger, so he didn’t question his size. He played sports — soccer (as a goalkeeper), football and wrestling — but was never the star. Since he wasn’t super-athletic, he focused his energy on academics and excelled in science and especially computers.

As a wrestler, he began to see that people manipulate their weight all the time. He started to wonder if he could do that, too. “For me, wrestling was actually a mentally healthy sport, as it turns body weight into an extremely malleable fact of our bodies,” he recalls. “Your weight simply decides who you wrestle, and that’s all. It stopped me from valuing myself through a number on the scale. With wrestling, I was able to become more comfortable admitting to myself where I was physically. I started to realize that my weight was in my control — so the possibility of losing weight and keeping it off started to sink in.”

AND THEN CAME THE TURNING POINT

“After my fourth wrestling season, I hit my all-time high weight of about 250 pounds,” he says. “I never actually saw that number, but I was in the mid 240s at the end of the season, and know I gained a bit of weight after that. So 250 is the number I go with as my start weight.”

Prom turned out to be just the beginning of his 95-pound weight-loss journey. His new suit — which had fit perfectly the previous winter for a cousin’s wedding — was too loose come spring, much to his parents’ surprise. Jesse had lost 20 pounds.

To lose those first 20 pounds, he started with intermittent fasting to gain a sense of control and to kick things off. “I knew I wasn’t in shape, so I decided straight off the bat that working out wasn’t going to do it,” he says. “I’m actually not sure I would have succeeded if I started with diet and exercise at the same time. It would’ve been too much.” With hindsight being 20/20, he says, “I know now that small, sustainable change is the approach to any attempt at a new lifestyle.”

When summer came around, things got serious (cue the “Rocky” theme song). That was when Jesse decided to integrate exercise into his routine. He started with running. “My first run, was not even a mile, and it went terribly,” he remembers. “But the next day I did the same thing. And the next day I did it again as well. And eventually it got easier, and I could run longer.” It’s exactly this day-by-day attitude that had carried him this far — and got him 50 pounds lighter. 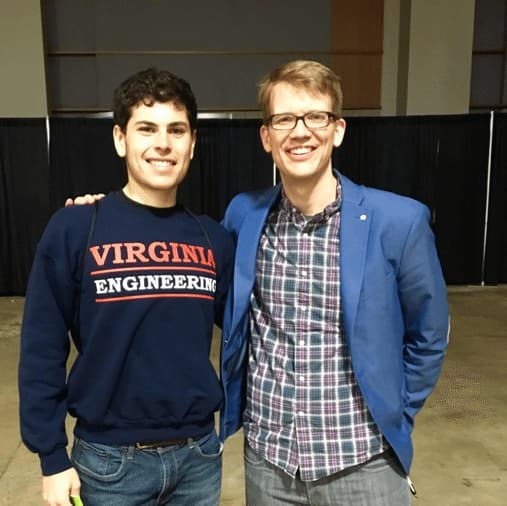 IT WAS THE OPPOSITE OF THE FRESHMAN 15, AND THEN SOME

Heading off to college meant he had to double down. “With MyFitnessPal, I could count what I was eating,” he says. It was a challenge in the dining hall, but MyFitnessPal’s database had all the nutritional info for the food-service provider his college used, “so it was never so bad,” he recalls. “And I was able to eat unlimited veggies with the huge salad bars available all day, every day. From here, it was autopilot. Running got better — I even started to enjoy it — and the weight was coming off.”

His mindset around food also was shifting. “Basically, to combat hunger, I learned how to eat to feel good,” he says. “That is, I started eating all sorts of veggies and lean meats. I stayed away from sugar when I could, tried not to drink my calories and processed foods became more of a treat since I knew they usually weren’t super satisfying.”

Jesse didn’t do this alone. He had a robust online weight-loss community and the encouragement of friends and family, in addition to his own steely determination and the help of food scales and apps like MyFitnessPal. “I love MyFitnessPal because it gives me freedom to eat what I want, when I want, without guilt,” he says. “It keeps me accountable and conscious of my progress. I have nights and days when I don’t track, but they are few and far between. The app gives me knowledge, and knowledge gives me power. I’m not scared to gain back the weight because I know how to take it off again.”

With his diet and nutrition under control, Jesse’s now focusing more on his training. “Though I don’t run many races aside from the occasional 5K, I run every day. These days I run 4–8 miles a day, hitting 30–50 miles a week. I love it. It’s meditative, it’s relaxing, it’s destressing — and it gives me room to eat a bit more when I want.”

In addition to the cardio, he’s adding strength workouts into his regimen. “I love to work legs because it helps with my running, but it’s also getting me into all-around physique work.” In fact, with the lifting comes the willingness to actually gain weight in the form of muscle.

After hitting his low of 155 pounds, Jesse’s finding himself confident and comfortable at a more muscular 165. And he’s definitely OK with that.

Benefits of a Digital Detox During Summer Travel

Tips for Traveling With Your DogHeather Loenser, DVM, knows first-hand the joys and challenges of traveling with her dog. She and her family recently adopted a year-old Border collie named Calvin. \"As

Grandparent GetawaysTrips to take with your grandchildren- \"No parents allowed.\" It\'s not a sign on a kid-only clubhouse, it\'s the first rule of travel for memory-making grandparent/grandchild vacatio

Each template in our ever growing studio library can be added and moved around within any page effortlessly with one click.

Tips for Traveling With Your DogHeather Loenser, DVM, knows first-hand the joys and challenges of traveling with her dog. She and her family recently adopted a year-old Border collie named Calvin. \"As
fitness184Food229inspiration339lifestyle191nutrition140Travel208